I'm going to give you some language for talking about what kinds of enjoyment games provide, how they provide it, and how those kinds of fun group up in Tabletop RPGs. Let's start with a glossary of “Kinds of fun”.  It's not complete by any stretch, but here we go: 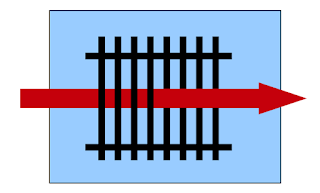 I've been tinkering on an extended game design project for...   Quite a while now.  The basic concept goes, in stages, like this:

1. Here's a bunch of modular game boards and pieces, arranged (and sold) in "playsets" so you can play a whole compilation of relatively abstract board games (things like Chess, Xianqui, Congo, Goro Goro Shogi, Amazons, and so on), with each set giving you a few games, and more if you pile more together.  Boards and pieces are abstract, simple, handmade, and characterful.

2. These games also just happen to give a toolkit of game... concept pieces (which, as of yesterday, I have started calling ludemes), which they share in various ways.  Most of them are from the same general family of games, or hybrids of cross-pollination.

3. If you pile together a few of these physical playsets, you have the pieces to play an adventure game in the style of Warhammer Quest / Descent / Gloomhaven...   Which uses the ludemes from the playsets to operate.  A minis-based adventure game where your warrior might have an analog to a "Knight move" and a "Bishop move".

4. And of course, said adventure game will then get roleplaying elements as something to add.

Aaaaaaaaanyway.  Having recently acquired a lathe and spun myself up some modular game pieces (Body+head+hat), I'm now in a position to start fabricating those playsets, and testing out variations on rules for the adventure game.
More on those, hopefully, quite soon. 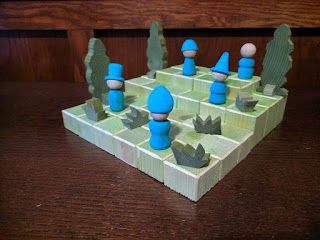 I've been posting pictures of this stuff for a bit, as I've been making it: 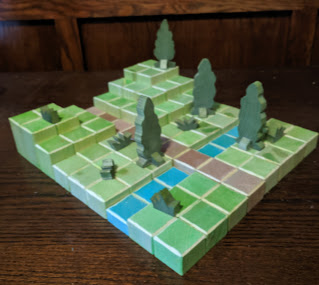 And on the whole, people seem pretty engaged.  So let's talk about how to make it - likely, you could work out most of this on your own, but it's also likely there'd be one bit that left you going, okay, huh?

To make the basic blocks, you will need a 2x2 bit of dimensional lumber (typically eight feet long and about 3 bucks), a saw to chop 2x2s into inch-long segments, some stain to color your wood, and a method for sanding the corner bevels.  You'll also need some glue, maybe a small brush, and a cup or tupperware of some sort.  For the notable tools, I use: 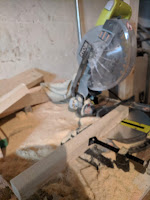 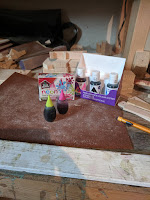 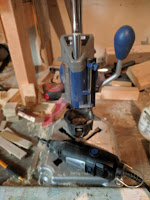 That's a cheapass Ryobi miter saw ($60), some food coloring (the neon stuff was about $3, the big precision color kit...  $20?  Candy-making leftovers, there)...   And a low-end Dremel rotary tool (which is sitting on the dremel workstation - that's not required for the basic stuff).

Now, there's a good chance you could do the cutting with a vast array of other saws just as well, even a hand saw and cut box if you have the energy, but...   Whew.

I don't think you can really beat food coloring on price.  That's just a winner.

You could likely sand the corners a number of other ways, as well, but a Dremel is not so much "A tool to find a replacement for" as it is "A tool that can replace half the other fiddly little crap in small woodworking".


Step One is "Chop up the 2x2 into inch-long segments".  You could go longer or shorter - as you like.  The size of the chop is the height of "ground level" off your table.

To me, a variance of 5/8th from one "level" to another on hills and the like is favorite, and a full inch means I can later add blocks that are below basic ground level.  Also, I wanted the blocks to have enough weight that I wouldn't need sticky pads on the bottom, and so on.

After chopping, brush the blocks against each other to get rid of any clingy bits.  Don't bother sanding them all that nice- you want the cut surface to be a little rough, so it'll take stain like whoa.


Step Two is staining.  I just use a tiny little tupperware tub, fill it up (it's about an ounce), add food coloring (typically a total of 5-9 drop per ounce of water), and then brush it on or just dunk the pieces one side at a time like so: 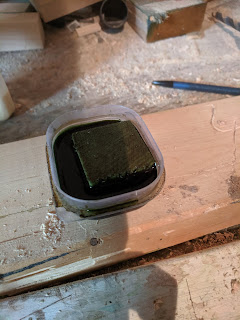 After staining, stand the pieces up on some scrap wood, paper towel, or other surface, and let dry (I leave them overnight).

Step Three is taking each block and sanding a bevel around the top edge.  This gives a nice white line once you sand down under the coloring. 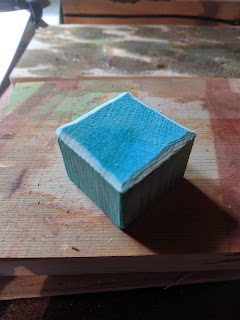 Step Four is gluing, making actual modules out of the blocks.  I've use carpenter's glue, Elmers, superglue, at various points.  Carpenters glue is, naturally, the one I'd recommend, since it's actually for this.  Some of my pieces are shown here: 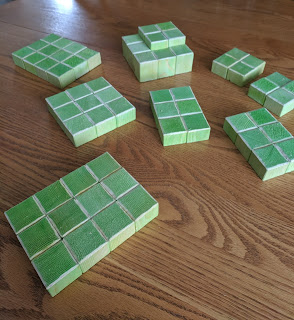 The hill top center there is five piece at 1 inch and 5/8ths, and four more pieces at 2 inches and a quarter long, respectively.

When gluing, do it with some kind of supporting angle.  I have two piece of baseboard screwed on top of my work bench in a right angle.  I put the first piece in that corner, and then glue the others to it, pressing the whole module against that into "square-ness" as I add pieces.  This method is pretty crude, but it works well enough for this; you might want to use long clamps or some more professional method to get it working as you want.

A quick note here: If you actually want to reproduce my scenery as-is, you just need the neon colours (which give a nice pastel when used sparingly) for the basic blocks.   The secret sauce is:

Grassland: Ground at one inch, hills as above.  Color is seven drops yellow-green, one blue per oz.
Water: Cut at 5/8th tall. Color is five drops of blue per oz of water.